Edna Bullock (1915 – 1997) Born and raised in the small rural community of Hollister, California, Edna’s first love was dance. Although she had dreams of becoming a professional dancer, she was persuaded by her family not to pursue the life of a performer. After college, Edna taught physical education at Fresno High School until […]
Back
Next 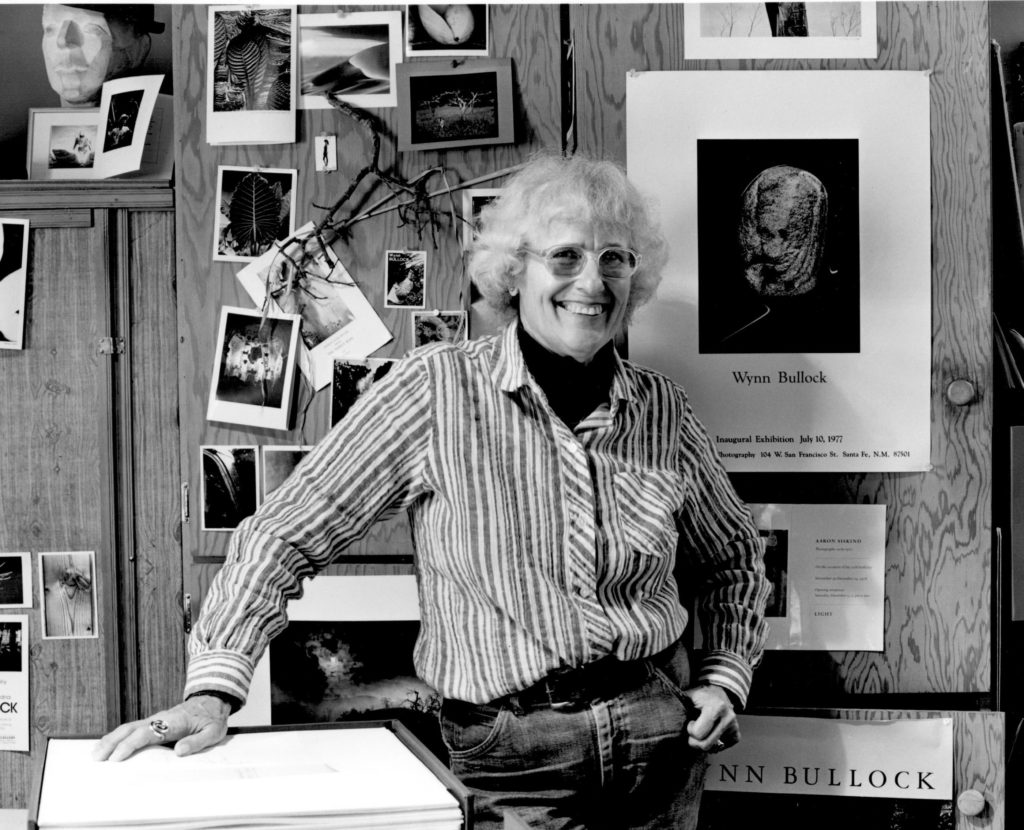 Born and raised in the small rural community of Hollister, California, Edna’s first love was dance. Although she had dreams of becoming a professional dancer, she was persuaded by her family not to pursue the life of a performer. After college, Edna taught physical education at Fresno High School until her marriage in 1943 to former concert singer and budding photographer Wynn Bullock.

She devoted the next 15 years of her life to being a full-time housewife and mother, raising two daughters, Barbara and Lynne, along with stepdaughter, Mimi. She then resumed her teaching career and retired in 1974 from teaching to care for her beloved husband Wynn, who died in November 1975.

Edna began her own career in photography in 1976, the year she turned 61. As she explained, “I had inherited a darkroom, camera equipment, and supplies. For more than 30 years I had been immersed in the world of photography. My own needs to be artistically creative were strong, so I decided to enroll in beginning photography at Monterey Peninsula College and see what I could do.” She tackled her new venture with typical zeal, and in an amazingly short time, friends such as Ansel Adams, Morley Baer, and Ruth Bernhard witnessed her evolution from student to workshop assistant to fellow teacher and exhibitor.

An exceptionally prolific artist for two decades, Edna produced a wide variety of black and white imagery, and is probably best known for her photographs of nudes, many of which can be found in a book released on her 80th birthday titled simply Edna’s Nudes (Capra Press, 1995). Reflecting her character, her work is intuitive, direct, zesty, graceful (she saw with a dancer’s eye), and touched with humor.

During her relatively short photographic career, Edna’s images were displayed in over 100 individual and group exhibitions throughout the U.S. and abroad, reproduced in numerous publications, and included in the permanent collections of such institutions as Bibliotheque Nationale, Kyoto’s National Museum of Modern Art, Monterey Museum of Art, University of Arizona’s Center for Creative Photography, and University of California, Santa Cruz.

Vintage and Original Gelatin Silver Prints
These original vintage and gelatin silver prints were all personally printed by Edna. Please contact us if you are searching for a particular image as we have access to the entire Edna Bullock estate archive.

Black and White Estate Prints
These limited edition estate prints are pigmented inkjet versions of the original Edna Bullock gelatin silver prints. These archival prints are controlled by the estate, and include a letter of authenticity.

LensWork Portfolio Prints
These special limited edition, gelatin silver prints were made of both Wynn Bullock’s and Edna Bullock’s works, from LensWork. Bullock Family Photography has now authorized the individual sale of these prints. These pieces are a great way to collect one of Edna’s images, printed in the traditional gelatin silver process she herself used.