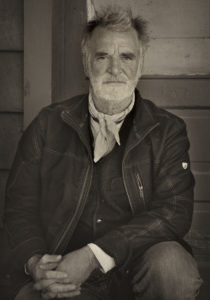 Scott’s unique portraits of ranchers and people of the west has made him one of the few great cowboy photographers of our time. As professional and fine art photographer for over 25 years, Baxter photographed primarily with large format film and prints with care in traditional processes.

In a 2016 solo exhibition at Ryan Gallery, Baxter released his never before seen new work, Gathering the Remnants. Inspired by the ranching term “gathering the remnants”, Baxter pulled negatives he’d never printed from, originating from shooting for over a decade for the highly-publicized project and book of the same name, 100 Years 100 Ranchers.

You can purchase signed copies of Scott’s book, 100 Years 100 Ranchers, at the Art Intersection online store.

Gathering the Remnants
These prints are made in various sizes all limited to editions of 10, printed in the traditional gelatin silver process from analog film.

Top Hand
These large Palladium prints were made in special editions limited to 7, and come from the series Top Hand in which Baxter photographed ranchers across the United States.

Books
This first edition, now rare photography book, encompasses Baxter’s over 12-year project by the same name, produced by Baxter for the 2012 centennial of Arizona’s statehood. The book features photographs Baxter made of ranchers and their families, who have been operating in the state for at least 100 years. Visit the shop here to purchase.

More about Scott T. Baxter
In this video Baxter elaborates on the making of the prints and work from The Top Hand Project.