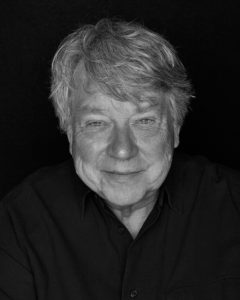 Michael T. Puff lives and works in the San Francisco Bay Area. He’s been a visual artist since early childhood, working as a painter and sculptor. During his years in higher education studying Theater Arts and Egyptian Archaeology, Puff worked as a theater set designer and received many awards for his work from San Francisco Bay Theater Critics. Today he works as a systems computer programmer at Stanford University and builds miniatures, while also pursuing his passion of fine art photography.

Puff began photographing in 2004 and later, under the guidance of master printer Mark I. Nelson, learned the platinum/palladium printing method he uses in his current work. Puff uses modern digital image capture with the extremely permanent and hand-crafted platinum and palladium printing process, merging the contemporary with the historical to produce unique and captivating images. The time-staking printing process he uses, which incorporates platinum and palladium metals into the chemistry, allows for a unique image with a beautiful color and tonal range.

Puff’s love for the theater is evident in much of his work, as he photographs on stage-like sets, often using dancers and actors as models, with images that could function as small moments from a larger narrative. A surreal theme runs through much of his work, as he uses his strong digital editing skills to manipulate scale and mood creating complex otherworldly images.

Surreal
In his surrealist work Puff photographs many different objects and models, composites the elements digitally and prints his final piece by hand in the platinum and palladium process in limited editions.

Figure
Originating from his many years in theater, Puff often chooses dancers for his figure subjects and photographs them on set-like constructs he creates. He then prints each by hand in the platinum and palladium process in limited editions.

In the Landscape
Traveling to many National Parks and sometimes bringing the natural world into the studio, Puff creates quiet and still images from the landscape, then prints each by hand in the platinum and palladium process in limited editions.