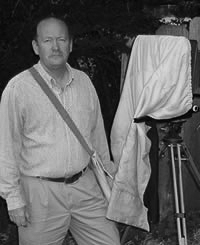 Randy Efros was born in Phoenix, Arizona in 1946. As a young man he worked in the family insurance business, but his primary focus in those years was racing motorcycles and automobiles. Racing taught Efros the kind of close attention and dedication he would later apply to his photography.

One of Efros’ sponsors, the U.S. Air Force, provided him with a Nikon camera and an extensive supply of color film, to document the race car on location. Efros was encouraged to use the camera to experiment more broadly, which led him into color landscape work.

Married to Rae Harrell in 1967, Efros had two daughters, Michelle in 1971 and Andrea in 1975. His wife gave him a copy of Ben Maddow’s Edward Weston: Fifty Years; the Definitive Volume of his Photographic Work which shifted the course of Efros’ photography. He began to collect Edward Weston photographs printed by Cole Weston. Soon after, he met Cole Weston and they quickly forged a friendship. Efros began to assist Cole Weston on photographic workshops and came to know Edward Weston’s second son, Brett, and Cole’s son, Kim. He was divorced in 1981. Between 1990 and 1992, Efros was Brett Weston’s last field assistant, living with Weston in Hawaii and Carmel, California.

In 1987 and 1988, Efros was a consultant to Arizona Bank’s collection of Edward Weston prints. He was an artist-in-residence at Academy of Art College in San Francisco, and taught advanced black-and-white printing there, in 1994 and 1995. He has also taught workshops in Arizona, California, Hawaii and Scotland. Efros was a member of Phoenix Art Museum’s Contemporary Forum board of directors from 2003 to 2011, and a founding member of the board of directors for the Phoenix Art Museum’s INFOCUS Photography support organization. He lives in Phoenix with his longtime love Susan Reynolds.

Books
Softcover portfolio books for four of Efros’ portfolios are available individually or as a set. Visit the shop to purchase.