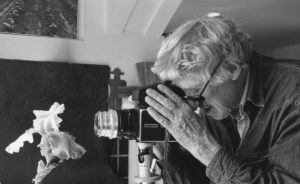 Rondal Partridge, son of the renown photographer Imogen Cunningham, began helping his mother in the darkroom at the age of five. At seventeen he became Dorothea Lange’s apprentice, driving her up and down the back roads of California as she created her well-known images of migrant laborers.

In 1937 and 1938 he worked with Ansel Adams in Yosemite, taking the now-famous photograph, Ansel in the High Sierra, late 1930s.

Intimately associated with the great California photographers of his time, Partridge absorbed all the techniques his teachers could give him, yet he wore this lineage lightly, dedicating himself to following the paths down which his own view leads him.

Films
Ryan Gallery at Art Intersection offers many photography books and films, including a documentary on Rondal Partridge, directed by his daughter Meg Partridge.