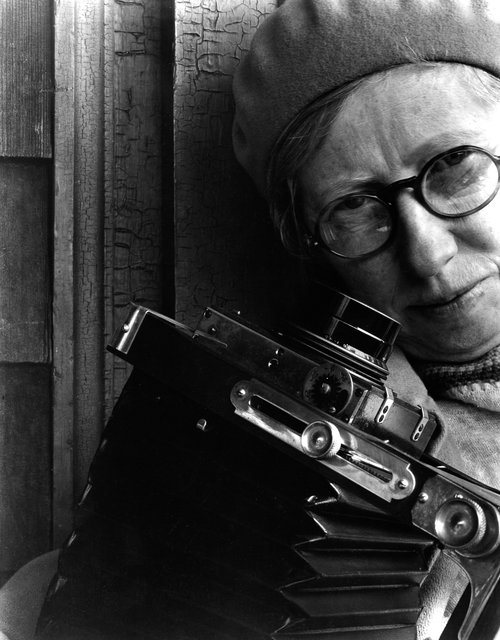 Which photograph is my favorite? The one I’m going to take tomorrow!
– Imogen Cunningham

One of the most prolific photographers in the history of the medium, Imogen Cunningham broke barriers for women in photography and was an important figure in the movement fine art photography in the early to mid-1900s.

Born in Portland, Oregon in 1883, Cunningham began her photographic pursuits with glass plate, a large format camera, and often using herself as a model, as seen in one of her fist images, Self-Portrait, 1906, thought to be the first nude female self-portrait in photographic history. She also pushed the medium’s boundaries in her Mount Rainier images in which she was one of the first to place a nude male subject (her husband, Roi Partridge) in front of her lens. Her experimental camera and darkroom work, detailed plant studies, and gripping portraits of fellow artists and dancers are also among the most praised images of the time.

An advocate of literature, Cunningham’s father Isaac Burns named Imogen after the heroine of Shakespeare’s Cymbeline. She grew up in Seattle, Washington and attended the University of Washington in Seattle, majoring in chemistry after she was advised by her professor that she should have a scientific background if she wanted to be a photographer. To pay her expenses she worked as a secretary to her chemistry professor and made slides for the botanists. Imogen Cunningham’s thesis when she graduated from the University of Washington with a major in chemistry was titled Modern Processes of Photography.

Cunningham went on to work in the Seattle portrait studio of Edward S. Curtis, the photographer who produced the twenty volumes of The North American Indian, where she learned the techniques of platinum printing. In Seattle Cunningham frequently exhibited her pictorialist-style work, often soft focus photographs of romantic tableaux she and her friends had staged. In 1914, her first one-person exhibition was held at the Brooklyn Institute of Arts and Sciences.

Imogen Cunningham married Seattle etcher, Roi Partridge, closed her studio and moved with Roi to California. Within two years the couple had three children, Gryffyd and their twin sons, Rondal and Padraic. With three young sons, her photography was largely confined to photographing her children and the plants in her garden. She took commercial work, began to make her first sharp focus plant photographs, and made her first double-exposure photograph. Cunningham was an original founding member of the group f64 and she taught intermittently at the California School of Fine Arts in San Francisco.

Over the course of her phenomenal 70-year career Imogen Cunningham has received dozens of prestigious awards and grants, and her work resides in numerous major museum and institution collections worldwide.

Cunningham passed away on June 23, 1976, at the age of 93. In the years before her passing, she worked with her son Rondal Partridge and her granddaughter, Meg Partridge, to establish the Imogen Cunningham Trust. Her vintage original prints and estate prints are regularly exhibited in Ryan Gallery and are available for purchase.

Original, Vintage Gelatin Silver Prints
These original vintage gelatin silver prints were all printed by Imogen Cunningham personally in her darkroom. We have access to entire Imogen Cunningham estate archive, so if you are searching for a particular image, please contact us for more information.

Platinum and Palladium Estate Prints
All of the platinum and palladium prints estate prints carried by Ryan Gallery, were printed by Imogen Cunningham’s late son, Rondal Partridge. Rondal was a master printer and created platinum prints for his personal artwork, so these analog contact prints are exquisitely printed from Imogen’s analog negatives.

Gelatin Silver Estate Prints
All of the gelatin silver estate prints carried by Ryan Gallery, were printed by Imogen Cunningham’s late son, Rondal Partridge, from her original negatives, in the years between 1976 – 2001.